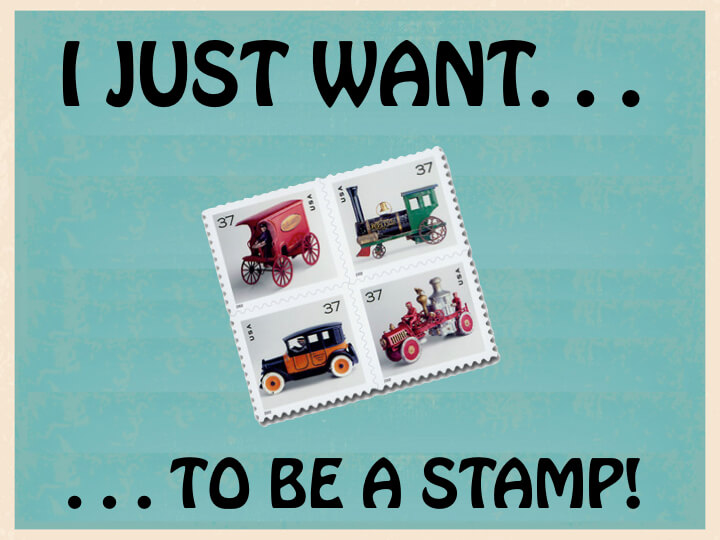 While I was at Indiana Bible College from 95-99 I had an assignment to attend 4 churches in Indianapolis and do a report on the churches I attended. I attended Apostolic Light House Pastored by Rev. Danny Thomas on a Wednesday night. On that night, Pastor Thomas preached a message entitled, “I Just Want to be a Stamp.” Over 20 years later that message has stuck with me. Below is MY RENDERING of that message.

I have traveled down the road of self-discovery! Trying to identify with my passion and my purpose. I have read books, filled up goal sheets, countless to-do lists and anything else that I could think of. My journey of purpose, led me to want to be The President of the United States, A Hollywood Actor and everything else in between.

Now that I look over my life I realize that my life is changing. My purpose for life has taken on a new meaning. The older and wiser I get, I am beginning to realize what matters most. I am closing the goals books, canceling my trip to Camp David, forgetting about Hollywood and placing my trust in God. I now realize that now all I want to be is … a stamp! I just want to be a stamp. Stamps are an interesting invention. They are those thin squares of paper worth less than a dollar at the time of purchase, yet it holds a certain magic about them. They are beautiful and somehow unexplainable. Grown men and little boys will spend their whole lives looking for stamps. There are many interesting lessons that we can learn from a stamp:

Regardless of what stamp you can find or buy, whether it is of President Lincoln or Elvis Presley, a stamp represents its country. Every US stamp you will find, has “USA” on the stamp to identify it as a symbol of our country. A Stamp is an ambassador of its homeland!

THE LIFE OF AN AMBASSADOR!

An Ambassador is, “one who carries a message.” The Apostle Paul stated in 2 Corinthians 5:20, “Now then we are ambassadors for Christ, as though God did beseech you by us: we pray you in Christ’s stead, be ye reconciled to God.” You are a personal messenger of Christ and you are sent on a special mission. You are under the authority of a ruler or government official. As an Ambassador you are sent to declare a message but, not to negotiate the response. An Ambassador is always an Ambassador.

THE LIFE OF A STAMP!

Isaiah 61:1 The Spirit of the Lord GOD is upon me; because the LORD hath anointed me to preach good tidings unto the meek; he hath sent me to bind up the brokenhearted, to proclaim liberty to the captives, and the opening of the prison to them that are bound; 2. To proclaim the acceptable year of the LORD.

THE STAMP IS SMALL BUT CARRIES A GREAT MESSAGE!

I want to be just like a stamp because a stamp is little, but it carries a great message. I in my self am little and insignificant, but God’s Word tells me in 1 John 4:4 “Ye are of God, little children, and have overcome them: because greater is he that is in you, than he that is in the world.” Regardless of how we may feel or what may come against us, we have a great message inside of us.

A STAMP GOES WHERE IT IS SENT!

A stamp goes where it is sent! I want to be available for whatever God wants to do in my life. I just want to go where I am sent. Isaiah 55:11 states, “So shall my word be that goeth forth out of my mouth: it shall not return unto me void, but it shall accomplish that which I please, and it shall prosper in the thing whereto I sent it.” I have had many plans and dreams for myself, but if I can just humble myself to the Great Postmaster, He will send me to places I can only dream about.

THE STAMP IS ALWAYS READY FOR SERVICE!

I always want to be ready for service. On the Post office in New York City have inscribed these words,

“Neither snow nor rain nor gloom of

night stays these couriers from the swift

completion of their appointed rounds.”

ONCE THEY ARE STRUCK THEY DON’T STRIKE BACK

I just want to be like a stamp and not strike back when I have been struck. I want to be a true Christian and handle myself with dignity and pride when people or situations come against me, I want to exercise the Words of Jesus when he said in Matthew 5:44, “Love your enemies, bless them that curse you, do good to them that hate you, and pray for them which despitefully use you, and persecute you.”

STAMPS TAKE A LICKIN AND KEEP ON STICKIN!

As a stamp, an ambassador of Christ, we can keep our composure in the face of adversity. Whether we like this or not, it is during these times when people are watching us and we can be the greatest witness. People may say to you, “I have no idea how you were able to stay so positive when the situation around you was so negative and toxic.” You can smile and say back to them, “by the grace of the Lord.”

STAMPS STICK UNTIL THE JOB IS DONE!

EVERY STAMP HAS A STORY!

Hawaii’s five-stage step from Monarchy to statehood has created a lot of hoopla in the stamp world. The 6-cent 1893 Hawaii stamp is valued at $12,500. Just like every stamp has a story, so does every Christian have their individual story of mercy and Grace.

John 9:24 Then again called they the man that was blind, and said unto him, Give God the praise: we know that this man is a sinner. 25 He answered and said, Whether he be a sinner or no, I know not: one thing I know, that, whereas I was blind, now I see.

Everyone has a story. John chapter 9 is a story of a blind man who was blind from birth, miraculously healed by Jesus. The blind man is never named. Change the details and it could be anyone. Although there are many lessons in this chapter, I want to focus on how often the blind man tells his story. All that he seems to know is that “I was blind but now I see.”

CONCLUSION – WE HAVE BEEN SEALED UNTO REDEMPTION!

When we are finished with a letter. We seal the letter before mailing it. The same is true for us. Jesus has sealed us unto redemption. Paul stated in Ephesians 1:13, “In whom ye also trusted, after that ye heard the word of truth, the gospel of your salvation: in whom also after that ye believed, ye were sealed with that holy Spirit of promise, 14. Which is the earnest of our inheritance until the redemption of the purchased possession, unto the praise of his glory.”